I was walking through the Arndale Shopping Centre at about 5:30pm today and noticed a large line of people queueing to get into Virgin Megastores. Turns out they were waiting for the release of the Playstation 3 at midnight tonight: 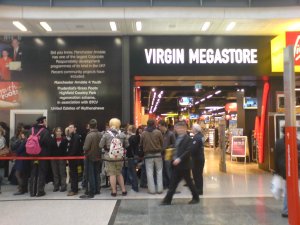 I don’t know how long the people at the beginning of the queue had been there but even so, from the time I took this picture they had another 6 and a half hours to wait.

I went in and had a look at a demo of the PS3 and fair enough, it does look good. But is it really worth standing in line for hours on end just so you can be one of the first to get your hands on it? It’s not as if they’re going to be in shortly supply – Sony aren’t predicting any shortages.

In fact, it’s the Nintendo Wii that’s in short supply apparently. I bought Rach a Wii for xmas. I was really lucky, I just walked into a Game shop and managed to pick up one of the last ones in stock. She loves it, she’s addicted to playing Wii Smooth Moves at the moment. Personally I love Wii Sports – it makes me feel like I’m playing competitive sports even though I’m not leaving the living room. At least the Wii gets you up of your arse and actually involves moving body parts other than your thumbs! I get a sweat on getting beat up playing boxing with my 5 year old daughter – she is rather good, and I hate losing! I know I should let her win, but it’s not in me. That’s what makes it even worse when she beats me. How embarrassing getting beat by a 5 year old girl!

I wouldn’t buy a PS3 on principle. £425 – that’s taking the piss. Why do we always get ripped off? It’s much cheaper in America and Japan. Not only that, the European version for some reason is not fully backwards compatible. Sony say they cannot be certain that all the old games will play on the new platform. Note this is only a problem with the European version. Why do consumers put up with it? Oh and of course the PS3 has been available in the rest of the world for months now.

I’m not fond of Sony because of this and other reasons. I don’t like the way they make everything proprietary so you have to stick to their standards and products. Like you have to use a Sony memory card – you can’t use a SD card.

Saying that, I wish I was more principled. I’ve got a Sony Ericsson phone and a Sony PSP. I feel dirty!