After a fantastic weekend in Paris (for me at least), we caught the Eurostar that Monday morning from Paris Gare du Nord into London St Pancras. This was the first time through the Chunnel for all of us. What can I say, it’s exactly what you’d expect from going through a very long tunnel. It wasn’t as spectacular as the rail journey from Venice to Grindelwald, but it was a little different. For instance it’s the only rail journey I’ve been on where you have check-in procedures.

By the way, as you may have gathered from Part 1 of this trip, I spent a fair bit of time planning every aspect of this holiday (overly obsessive some would say). This included using the excellent resource that is Seat 61 to ensure we had good seats.

One Final Day in London

We arrived in London around lunch time and went straight to our hotel near St Pancras. We were only in London for one night this time before flying out from Heathrow the following day.

We were booked into a cheap and cheerful deal at the Premier Inn. I’m more than familar with the Premier Inn after spending many a night in them up and down the UK for work trips during my last main job in the UK.

Rachelle was still coughing her guts up (bronchitis we would later learn), so after checking in, Rach confined herself to the hotel room for another day while I took Lauren to see Westminster Abbey. It was a wet, miserable grey day but that didn’t dampen my enthusiasm for getting in some more sightseeing. And after realising what she had missed out on by not joining my walk around Paris, I’m pleased to say Lauren was keen to see Westminster Abbey too.

Surprisingly, Westminster Abbey was one of the places I never made it to when I lived in London. A big oversight on my part.

The tour was fascinating, featuring a smorgasbord of Britain’s most historical figures. Westminster Abbey has been the site for coronations and royal funerals since 1066 and features literally hundreds of plaques and monuments honouring the great and good. Poet’s Corner in particular stands out as a reminder of the contribution British artists have made to English literature, honouring the masters such as Shakespeare, Dickens, Chaucer, Byron, T.S. Eliot, Dylan Thomas and many others. I hope they’re going to reserve a spot for Nick Hornby and Jeffrey Archer!

Westminster Abbey was our last sightseeing stop in London, and Europe. I returned with Lauren back to the hotel. That night we ate in the hotel’s Thyme pub restaurant. I’ve always had a soft-spot for the Premier Inn’s pub restaurants and this one didn’t disappoint. A last chance for some good ol’ pub grub and a ‘proper’ pint or two.

The following day we caught the Heathrow Express and boarded a British Airways flight to Hong Kong.

Hong Kong is one of those places that I’ve always wanted to visit. However, in hindsight, I think I got this part of the itinerary wrong. Instead of having the relaxing stop-off on Sentosa Island on the way out, we should have done it the other way round – Hong Kong sightseeing on the way out to Europe and Sentosa Island chill-out on the way back.

By the time we arrived in Hong Kong, travel weariness had well and truly set in. Rachelle had been ill for the last few days and just wanted to get home, and even I was getting to the point of indifference – ‘Oh look, yet another beautiful iconic site’. I’ve always regretted not doing the year-long backpack around the word thing, but perhaps I’m not cut out for it after all. Or maybe staying in comfy hotels instead of youth hostels dulls some of the travel experience.

For once we didn’t really have any itinerary for Hong Kong, just a list of places we would like to visit, including Victoria Peak and the Big Buddha, neither of which we ended up visiting.

For our final stop on this month-long trip I had arranged for us to stay in the Marco Polo Hongkong Hotel, which is actually in Kowloon. I chose the hotel for its location – in the vibrant Tsim Sha Tsui district, smack bang on Victoria Harbour facing across from the spectacular Hong Kong skyline.

It wasn’t cheap but it wasn’t too expensive either given its location and facilities. It’s adjacent to the Star Ferry and adjoins the Harbour City shopping mall. We also had one of our best meals of the entire trip in the hotel’s buffet restaurant. We tend to shy away from buffet restaurants as it’s usually quantity over quality. Not so on this occasion.

We arrived in Honk Kong on the Wednesday afternoon. In truth we could easily have caught the excellent public transport system to our hotel but after a 12 hour overnight flight (with no sleep), we avoided any chance of hassle and hopped in a taxi.

That night and the following day was spent lazing around the hotel and wandering around Tsim Sha Tsui just taking it all in. I’d never previously visited China, or Hong Kong, so I was curious to what extent Hong Kong may have changed since Britain handed back control in 1997. From what I could tell, probably not much. Hong Kong still maintains a level of independence and autonomy under the ‘one country, two systems’ principle, and there is plenty of evidence of British influence from its 100-yr lease. It’s still one of the world’s leading financial centres and there’s no signs of a move away from capitalism. Everyone we spoke to spoke fluent English and all the signs were in both Chinese (don’t ask me whether they were Mandarin or Cantonese) and English.

If you’re wanting the authentic Chinese experience then Tsim Sha Tsui is probably not the place. It’s very much the Hollywood of Hong Kong, even with its very own walk of fame – the Avenue of Stars – featuring foot and hand prints of stars such as Jackie Chan, and most notably a statue of Bruce Lee.

In the evening the highlight was watching the Symphony of Lights – a laser and light show set to music, beamed from the skyscrapers on the opposite side of Victoria Bay. 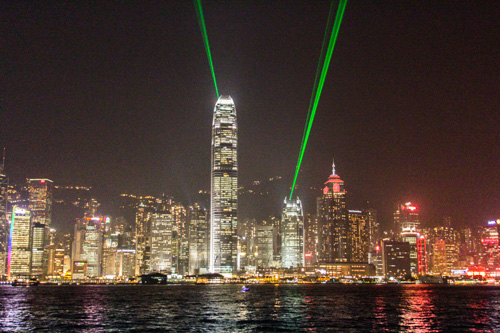 On our final full day in Hong Kong I managed to convince Rach to join myself and Lauren for a trip across the bay on the Star Ferry. I couldn’t convince her to take the trip further up to Victoria Peak but I wasn’t too fussed. I had already settled on the fact that we were all too tired to appreciate Hong Kong and would have to wait for a return visit.

While over in Hong Kong I couldn’t help myself – another Apple Store to tick off the list.

That evening we had another wander, taking in the sights and sounds around Victoria Harbour.

On the final day we were to fly out in the evening so did a final bit of last-minute shopping in the morning. Like many other Asian cities, there’s no shortage of malls. I was keen to get out of the malls though. After all, you see much more interesting things out on the streets. 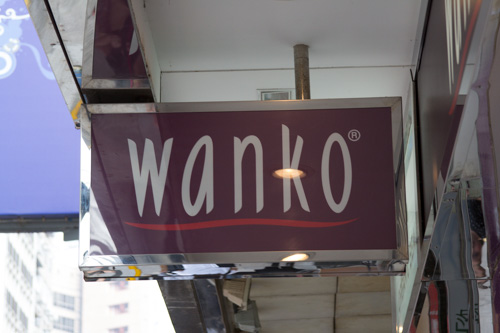 Registered Trademark – yes I am a child.

I regret not buying this, whatever it is: 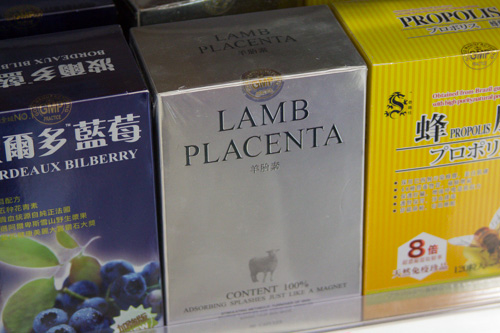 So in summary our brief stop-off in Hong Kong was not exactly as planned but it was definitely enough of a taster to make us want to return. I’ll see you next time Big Buddha!

The Qantas flight home is a blur. I’m sure we must have resembled zombies walking through security at Brisbane Airport.

This was a dream trip in every way and normally coming home from holiday is a massive deflation. Things were a little different this time though. We weren’t returning to dreary old England. We live in the Sunshine State. Coming home to warm sunshine and clear-blue skies soon washed away the post-holiday blues.

I’m not sure if it came across in these blog posts but I absolutely loved every minute of the trip. I only wish Rach had been in better shape for the last week.

The trip was the result of months of planning. It wasn’t cheap either. We could have bought a new car with what we spent on this little adventure. We still drive around in our old banger. No regrets though, there’s no way I would trade in the experiences for a new car. The memories of the trip will last forever. A new car depreciates as soon as you drive it off the forecourt.