It’s been a while since I’ve posted but back to the trip…..
Leaving early that morning, our departure was mixed with a sense of regret that we’d only allowed one full day in Venice, but also excitement for the next stage of our itinerary.

It was still dark when we left the hotel. Our train from Venice St. Lucia was due to leave at 07:50 but we made sure we left with plenty of time to spare. Getting to the station on the water bus wouldn’t be a problem. Finding the water bus in the first place would be. In my defence, the streets were very dimly lit, there was no one around to ask directions, the map was too high level to show the water bus pickup point we needed to get, and I had no data left on my phone.

To get to Grindelwald in Switzerland we had to catch four trains: Venice to Milan, Milan to Spiez, Spiez to Interlaken, and finally Interlaken to Grindelwald. This was one of the main reasons I wanted to travel light. Unfortunately, I was travelling with two females so my request fell on deaf ears.

Luckily we had no problems. In fact, travelling by rail in Europe is an absolute joy, we loved every minute of it. Travelling through Northern Italy past the Italian Lakes and up into the Swiss Alps must surely be one of the best rail journeys in the world.

I was all set up with a beer and some movies on my iPad but who needs an iPad when you have those views. 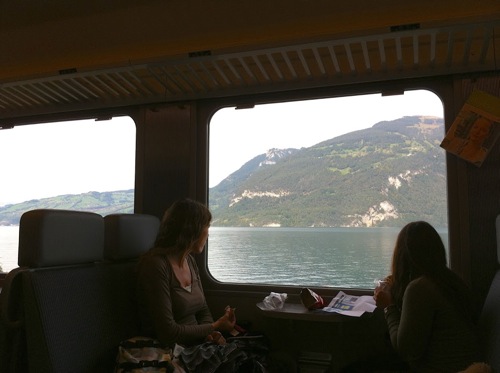 We eventually arrived in Grindelwald mid-afternoon. Grindelwald was everything we had hoped for and more. We stepped off the train into cool, fresh mountain air and, just like Venice, it felt like we were stepping into a painting.

Grindelwald sits 1,034m above sea level in the Bernese Alps, nestled between the imposing Eiger, Mönch and Jungfrau mountains. Officially it was still the summer season so there was no snow on the ground – we would have to climb much higher for that.

I couldn’t wait to get amongst it and breathe the fresh alpine air. Looking at Rachelle however, I feared she wasn’t in a fit state to join me yodelling amongst the mountains. She had started to feel like she was coming down with something while we were in Venice, and by the time we reached Grindelwald she was in full blown cough-her-guts-up mode. She toughed it out while we were in Grindelwald but that would effectively be the end of her holiday.

We stayed at the Hotel Gletscergarten, a charming family run chalet-hotel that has been around for 113 years. Our room had a skylight so when you laid on the bed you could look straight up at the Eiger mountain. It was very quiet when we visited in October. I think I only saw one other guest the whole time we were there.

The whole village was quiet. That evening after arriving we tried out one of the restaurants and we were the only ones in there. After the meal we went back to the hotel and Lauren dragged us down to the games room. She was in her element – the whole games room to herself. We played table tennis for the first time in a very long time.

We only had one full day in Grindelwald and there were a number of options for things to do that Thursday. One of them was a trip up to Schilthorn – a 32 min cable car ride up to the summit where a significant amount of On Her Majesty’s Secret Service was filmed. For a Bond fan like me, that was very tempting.

As great as this sounded, all the guide books and travel sites told me that if you only have one day in Grindelwald a trip to Jungfraujoch should be top of the must-do list.

Jungraujoch is called the ‘Top of Europe’ because at 3454 metres, it is Europe’s highest railway station, and the train journey to get there is described as one of the great train journeys of the world.

We were warned to check the weather forecast early morning before we set off. If it was forecast bad weather over Jungfrau there would be no point going up as visibility would be zero. Thankfully, the forecast was good.

We left early to beat the crowds to the top. At the station I handed over my life savings for 3 tickets. This must surely be the most expensive per-km railway journey anywhere in the world?

We got on the train and was joined by two thousand Japanese tourists. Great. All trip it seemed like we were surrounded by snap-happy Japanese tourists. I hate to stereotype any nationality but Jesus they really need to have a word with themselves about camera etiquette. All trip we had been surrounded by them taking photographs of absolutely everything, and I mean absolutely everything. It never ceased to amaze me when I saw them go over to look at an amazing view or take a picture of a famous landmark, snap the picture and immediately walk away without actually looking at it without a lens. What’s the point in that? They might as well have stayed at home and looked at photo’s on the Internet. A lot of them were also using their iPad to take pictures. Apart from the fact that they look stupid holding an iPad up to their face to take photo’s, the iPad is a crap camera. The iPhone on the other hand is an excellent camera. We even saw one Japanese woman on her own on a kids ride in Singapore filming herself for the full duration of the ride. Bizarre.

Half of them don’t even know how to use a camera, like leaving their flash on for every night shot even if they’re taking a photo of a building 300 feet away – as if their tiny little flash is going to light up the entire city skyline. Rant over.

The journey to the top took approx 50 minutes with two short stops on the way. The first stop was at Eigerwand (Eiger Wall). We stepped out onto the viewing platform and was greeted with spectacular views down into the valleys. 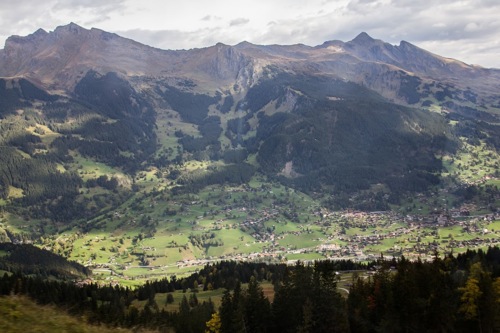 At this point though we were still among the green mountains. It was the second stop at Eismeer (Sea of Ice) that blew me away. I stepped on to the viewing platform and it was as if we had stepped into another world. Gone was the greenery – replaced with snow and ice as far as the eye can see. It was truly breathtaking.

The cogwheel rail carriage slowly took us up the tunnel that burrows through the Eiger and Monch mountains and into Jungfrau. The tunnel and railway station was completed in 1912. Within the complex there is a memorial to the many engineers that died during construction.

The highest railway station in Europe is unlike any I’d ever been to. On exiting the train you enter a series of tunnels that connect different features of the vast complex. After walking through the Ice Palace we went outside on to one of the peaks. There is an area that is cordoned off with ropes to stop you literally sliding off the mountain. Thank god for those ropes. Rach and Lauren took a few steps out before turning around and going back in. All around us tourists were falling on their backside – slipping on the ice. It would have been funny if I wasn’t concentrating so hard on keeping upright myself!

At that point the weather and visibility was good. I went to the edge of the peak gazed out at the Alps before me. It really was worth every one of the many Swiss Francs we paid to get to the top.

After lunch we went to the Sphinx Observatory Tower which is at the summit of the Sphinx – a peak that lies just to the east of the col. By that point it had started snowing and Rach was in no state to go outside, so I went outside with Lauren. The Sphinx Observatory Tower offers 365 degree views but bad weather had suddenly descended on us and visibility was really poor. We couldn’t see a thing but Lauren loved it nonetheless. The last time she had experienced she was about 4 so really can’t remember it. 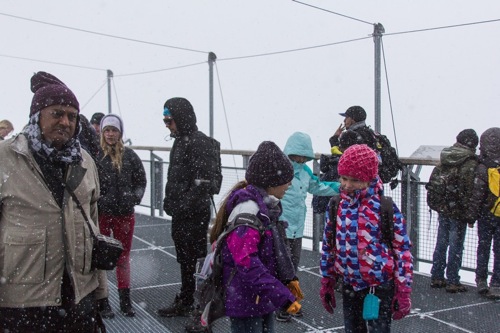 Here’s a video I found on YouTube that provides an overview of Jungfraujoch:

We returned to Grindelwald mid-afternoon. Rach went straight back to the hotel as by that time she really was coughing her guts up. I took Lauren for a game of crazy golf.

That evening we had a quiet night relaxing in the hotel. We would be catching a train to Paris the next day so a little bit of relaxation was called for before another cram-it-in city visit.

I loved our short time in Grindelwald and we were gutted to leave. We could have easily spent a week there.