A late flight to Venice from Gatwick Airport landed us at Venice Marco Polo Airport shortly after midnight.
This was our first visit to Venice but I’d done my research. I knew at some point we would undoubtedly get lost in the car-less maze which is Venice.

We followed the signs outside towards the water taxi. The water bus would have been cheaper but at that time of night it was too late to mess about. I wasn’t even sure they still ran past midnight. Luckily we managed to share a water taxi with a Scottish couple. On our own it would have been over ¢100.

We cruised down the Grand Canal towards our hotel. This is the way to arrive! It reminded me of that scene in Casino Royale towards the end when James Bond cruises down the Grand Canal in a luxury yacht, before (spoiler alert) Eva Green goes on to betray him. Well this wasn’t quite a luxury yacht and I hadn’t just finished convalescing at a luxury retreat after being tortured for my poker winnings, but that didn’t stop me considering the similarities.

We got lost for the first of many times to come trying to find our hotel. In fact, we had walked past it and completely missed the sign. Luckily Rach was on the ball when we doubled back to look again. We were only there for two nights so had booked in to a cheap Guest house – the Palazzo Rosa.

After far too little sleep we were up early that Tuesday morning to make the most of the day. We only had one full day in Venice so we were determined to make the most of it. Unlike other places on our trip I hadn’t booked tickets for any of the sights in Venice. I had already determined from the guide books that there was enough to see just walking around Venice in a day, without trying to fit in tours of St Mark’s Basilica, Doge’s Palace or the other major sites that would undoubtedly require spending a good amount of time waiting in queues. We would have to save them for a future trip.

Venice is a magnificent walking city. We walked and walked and walked that day and loved every minute of it. Even Lauren enjoyed it. Well, she didn’t complain about the walking which was a rare treat. Walking the streets of Venice is like stepping into a renaissance-era painting.

Everywhere you look there’s a feast for the eyes; the pastel colours of the buildings, the ornate fórcolas on the gondolas, the hidden gardens, the carnival masks and Morano glass displayed in the boutique shop windows. 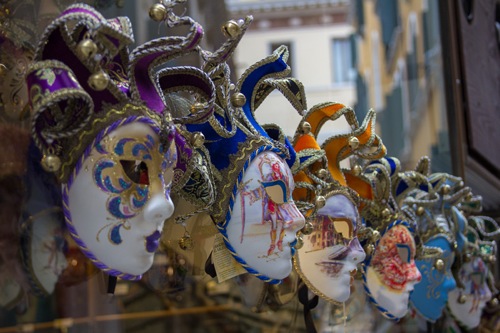 It’s a magical city and in my opinion we chose the perfect time to visit. It was busy but not over-crowded as I’m told it is in the heights of summer. The sun was out and it was warm – not too warm or too cold, the perfect temperature for walking. There were a few puddles about hinting at earlier rain but there wasn’t a drop of rain while we were there. It was bliss.

Some people had described Venice to me as dirty and smelly. I didn’t find that at all. All I could smell was the fresh salty sea air.

We walked from our hotel towards St Mark’s Square (Piazza San Marco), passing over the Rialto Bridge. The narrow streets and small squares were bustling with tourists but, again, it wasn’t over-crowded.

Italy is renowned for its Piazzas and surely San Marco must be its finest. Dominated at one end by the byzantine-style domes of St Mark’s Basilica and the towering Campanile, and surrounded by a mixture of renaissance, baroque, and neo-classical buildings on each side that once held the offices that governed the vast Venetian empire that stretched all the way to Turkey. 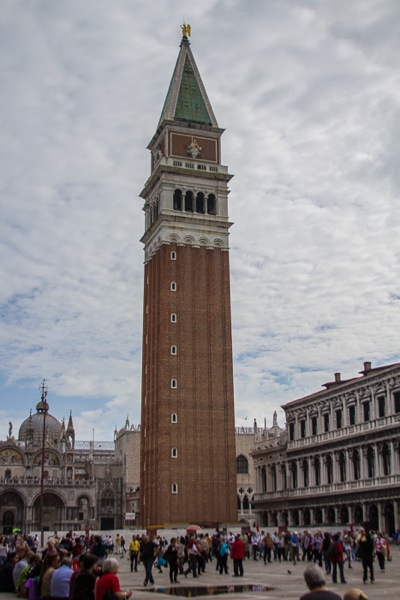 We took a seat at one of the pavement cafe’s with a live orchestra, knowing that I was probably about to drink the most expensive coffee I’d ever purchased. I didn’t mind. If you’re going to over-pay for a coffee where better than a beautiful morning in St Mark’s while being serenaded by a live classical orchestra. Only after sitting down did I realise that we were sat at Caffè Florian – one of the first places in Europe to serve coffee (Circa 1720).

That morning San Marco was alive with tourists marvelling at their surroundings, and parents watching their kids chase the pigeons, as I’m sure it is every morning. 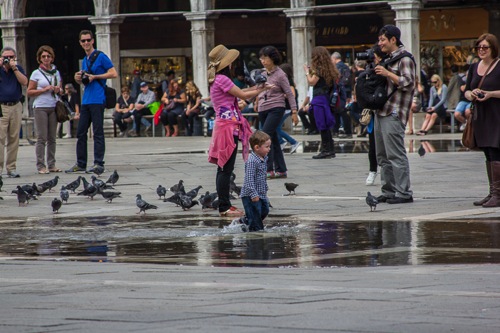 On leaving St Mark’s we briefly considered getting tickets for a tour of either St Mark’s Basilica, Doge’s Palace, or the Campanile, but that quickly left our heads after we saw the queues. If we had been in Venice for longer I would have bought tickets in advance.

The rest of the morning and afternoon was spent wandering the city, getting lost and loving it. Every now and again we would spot a sign-post pointing to San Marco or Rialto, which would help us re-gain our bearings. If all else failed we could always refer to the life-saver which is Google Maps on my iPhone.

We briefly joined the tourists jostling for a spot to take a photo of the Bridge of Sighs, so called, according to legend, because when the prisoners passed through the bridge from Doge’s Palace on the left to the prison the right, they took one final look at glorious Venice and sighed, before entering the dark, dank prison. It was called the Prisons’ Bridge before Lord Byron renamed it in the 19th Century. 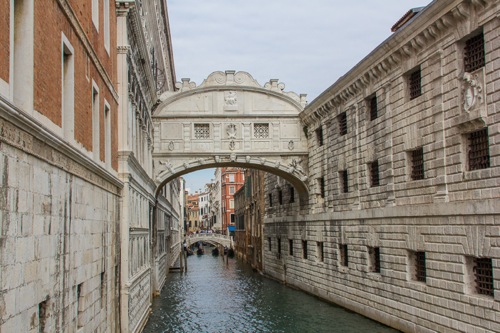 For lunch we found a small Trattoria and went for some traditional Italian pizza. Sat outside eating our lunch we had to laugh when a group of Japanese tourists came up and asked the waiter if they could get their photo taken in front of the restaurant holding one of the pizza boxes.

We returned to our hotel mid-afternoon to get changed for the evening. We wanted to head out for the evening while it was still light so that we could take a sunset ride on a gondola.

If Venice looks great mid-day, it looks absolutely stunning during the soft light of sunset – a great time to take a Gondola ride. It’s expensive but you can’t go to Venice and not take a Gondola ride. Rach and I sat in the customary couples position while Lauren had her own special chair back towards the gondolier. Most of the other gondolas had honeymooners so it may have looked a little odd with the three passengers but we weren’t bothered, if anything it was even more special having Lauren with us. 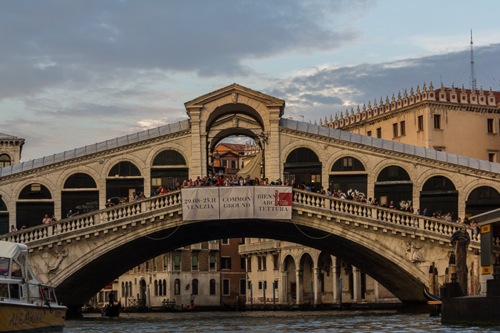 Some of the Gondoliers serenade their customers singing songs from the opera through the canals of Venice. I’m glad to say ours limited it to the occasional history lesson of the buildings we were passing. Once we were out of the Grand Canal it was wonderfully relaxing drifting through the small canals with only the sound of the water lapping the sides.

That evening we went for Dinner at a restaurant next to the Grand Canal near the Rialto bridge. For once I hadn’t done any research on restaurants or booked ahead so it was chosen purely at random. Once seated I did as the Venetians do and ordered a pre-dinner Spritz. Rach had a Bellini. The meal was pretty average but we had no complaints about the location. 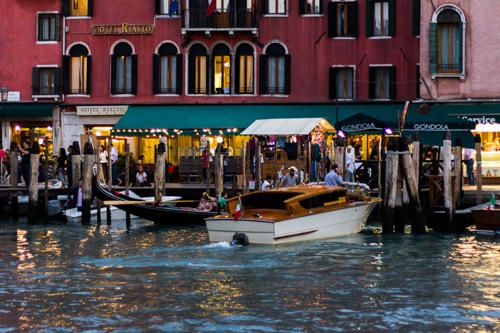 Later, we wandered back to the hotel passing some mouth-watering Gelato, wishing that we had skipped dessert. 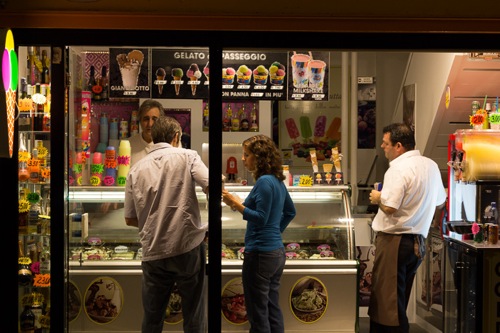 The next morning we had to be up bright and early to get to the train station for our 07:50 train onwards to our next destination.

Venice is one of the most beautiful and unique places I’ve ever visited. One day wasn’t nearly enough. We will return!