For the last few weeks I’ve been doing a lot of research into the different ways I can use the Internet to make money. I’m not talking about a bit of pocket change. My goal is to make a good living online, giving us financial freedom and liberation.

A lot of ideas have been forming in my head based on things I have learnt from different blogs and podcasts that I subscribe to, and books that I’ve read. I’ve known for a long time it’s possible to make good money on the Internet, the thing I’ve been struggling with is exactly how.

I’ve read quite a few books in the past about starting a business, getting rich, becoming a millionaire, etc, but none have had such a profound effect on me as The 4-Hour Work Week by Tim Ferriss. 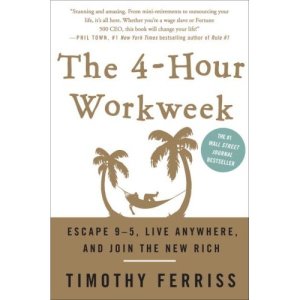 As per the title, in his book he explains the steps he took to build passive income so that he only has to work 4 hours a week. He spends the rest of his time pursuing things he loves, and some of the things he does with his time are truly amazing. The beauty of this book is that it explains how you can leverage new systems and business models on the Internet to make money, while only working a few hours of the week.


Here are some of the key concepts in the book which I’ll explain in more detail below, I’ll also try and explain how I plan to put the concepts into action:

They key to financial freedom and liberation is to build income streams that make you money again and again, even when you’re not working. Like many people, at the moment I make money based on the hours that I work. It’s simple: if I don’t work I don’t get paid. So the key is to develop something that, once developed, does not require my time, effort or even presence to keep it generating revenue. I’ll get paid when I sleep!

Once established, in order for me to reach the goal of having income streams that generate me money without my time, effort, or presence, I then need to take the next step – eliminate non value-adding work and automate as much as possible.

Eliminate non value-adding work and automate as much as possible

There’s quite a lot of detail about this in his book which I’m not going to repeat here. I was familiar with a lot of these principles before as I’ve been on a Six-Sigma course, which shares a lot of these principles. In particular the Pareto principle, i.e. the 80/20 rule. This is the principle that you generate 80% of your revenue from 20% of your work, so the goal is to concentrate on removing the 80% of your work that doesn’t generate revenue and build on the 20% of the work that does generate revenue.

This is just one of the principles, there are many more. Many of which I found I could easily relate to.

This was the best revelation for me. After working for outsourcing companies I’m more than familiar with how this works. What I didn’t realise however, it’s not just the big companies that can outsource work to India – I can and you can too! There are ‘Virtual Assistance’ companies established in India and China that you can outsource tasks to for as little as $5 an hour. You can outsource anything, and I mean anything. As long as it’s a task that doesn’t require their physical presence.

Take a look at GetFriday.com to see what I mean.

When I started writing this post I didn’t realise how large it would be and how much I had to write about. So I’m going to leave it here and break the rest of the post up over the next few days. In my next post I’ll explain some of the steps I’m taking to put these concepts into action, and the mistakes I made with my first Internet business.